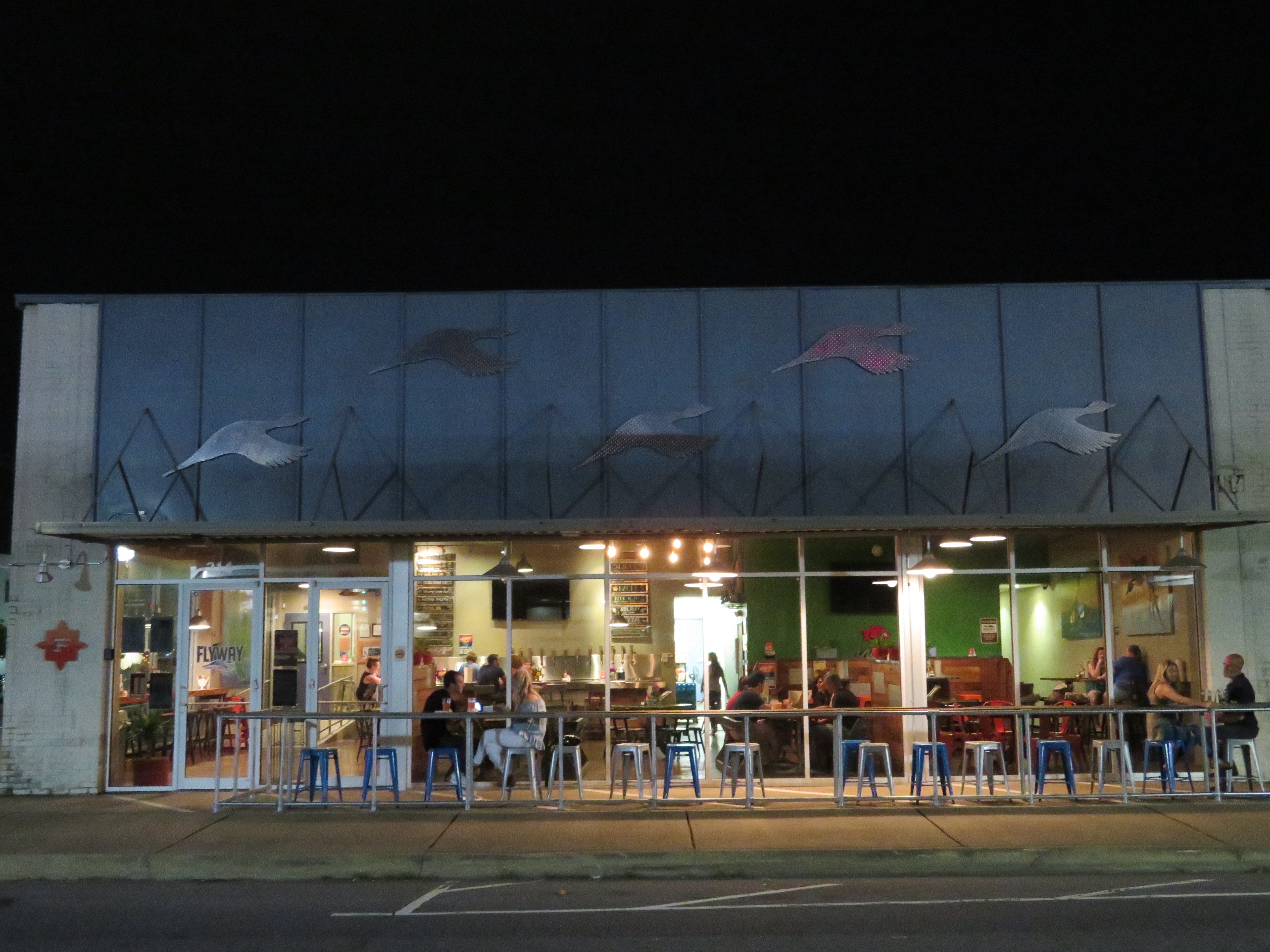 When visiting Central Arkansas, it can be easy to overlook North Little Rock unless you’re attending a baseball game at Dickey-Stephens Park or a concert at Verizon Arena.  North Little Rock has a population of 62,000 compared to Little Rock’s 194,000.  However, downtown North Little Rock is a very vibrant area with connections to Little Rock via the Metro Streetcar.  The life of the party is clearly on North Main Street, but one block away visitors will find Flyway Brewing Company at the intersection of Maple and West Fourth streets.

The brewery clearly plays up it name in its decor, as evidenced by the geese featured on the building’s awning over its patio.  The front door prominently displays the brewery’s primary logo, but also its secondary logo featuring a compass.

After walking in, visitors see a wide open space.

Don’t let the crowd scare you away from sampling the beers at Flyway.  My wife and I arrived maybe 30 minutes before the brewery was set to close.  The brewery features an extensive food menu (see it here) and up to a dozen of their beers on draft (see list here).

Although Katie and I were both hungry, we opted not to order any food because she didn’t want to be that customer who ordered food just a few minutes before the kitchen closed.  So I can’t comment on any of the food, but because we sat at the bar we saw a few items go out to customers.  The pretzels looked especially delicious, but if I eat here on my next visit I’ll probably try one of the wild game brats.  They offer wild boar, rabbit, elk, and a few other wild game options.

At Flyway, customers get to build their own flights, which feature four beers.

Whenever I visit a brewery with Katie we work to split up the draft choices and cover the majority of the beers.  Katie ordered Nine Killer Imperial IPA, Pintail IPA, Early Bird IPA, and Mighty Wing, which is a collaboration with Stone’s Throw Brewing.  Mighty Wing is a blend of Flyway’s Bluewing Berry Wheat and Stone’s Throw’s Jar the Floor peach saison.

I ordered Migrate Pale Ale, Free Range Brown Ale, Magdalene Tripel, and Red Velvet Ale as part of my flight.  I also fortunate and received a sample of Kestrel Kolsch.  The Free Range Brown Ale and Magdalene Tripel were by far my favorites, but every beer hit the spot representing the intended style.  If you’re interested in reading my comments on Untappd, you can find me here and add me as a friend.

The dining area is an extremely large space, which means there is a LOT of wall space to be filled.  As a geographer, there was something that clearly called to me when I entered the brewery and sat down at the bar.  To the left of the bar is a large wall covered with a map of North America, so I naturally had to photograph it.

As much as I loved the image, I did not realize its significance of the artwork to the brewery until afterward.  As detailed on its website, the brewery’s name references the Mississippi Flyway, which is the largest bird migratory route in the Western Hemisphere.  So while I saw the image and thought about the map component, I really should’ve viewed it as an ornithologist.

Regardless of how you view the space at Flyway Brewing, there is no mistaking that it is a great brewery in an up-and-coming entertainment area of North Little Rock.  The food will satisfy a wide spectrum of taste buds.  The beers are sure to satisfy everybody, and are excellent representations of their styles.  The wait staff is friendly, helpful, and attentive to customers.  Hopefully that means visitors to central Arkansas will make the trek across the river and visit Flyway Brewing. 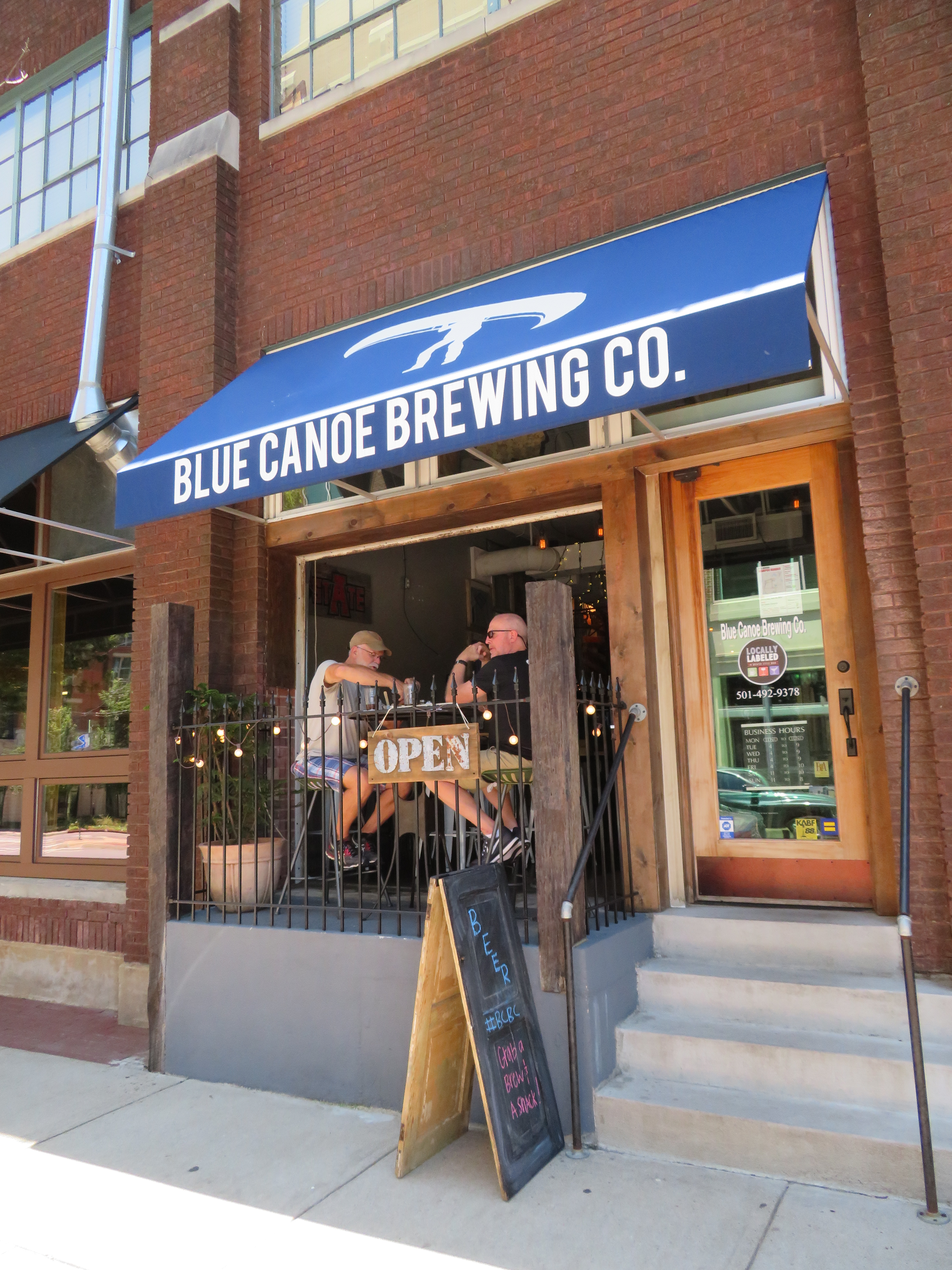 A pint at Blue Canoe Brewing in Little Rock, Ark. 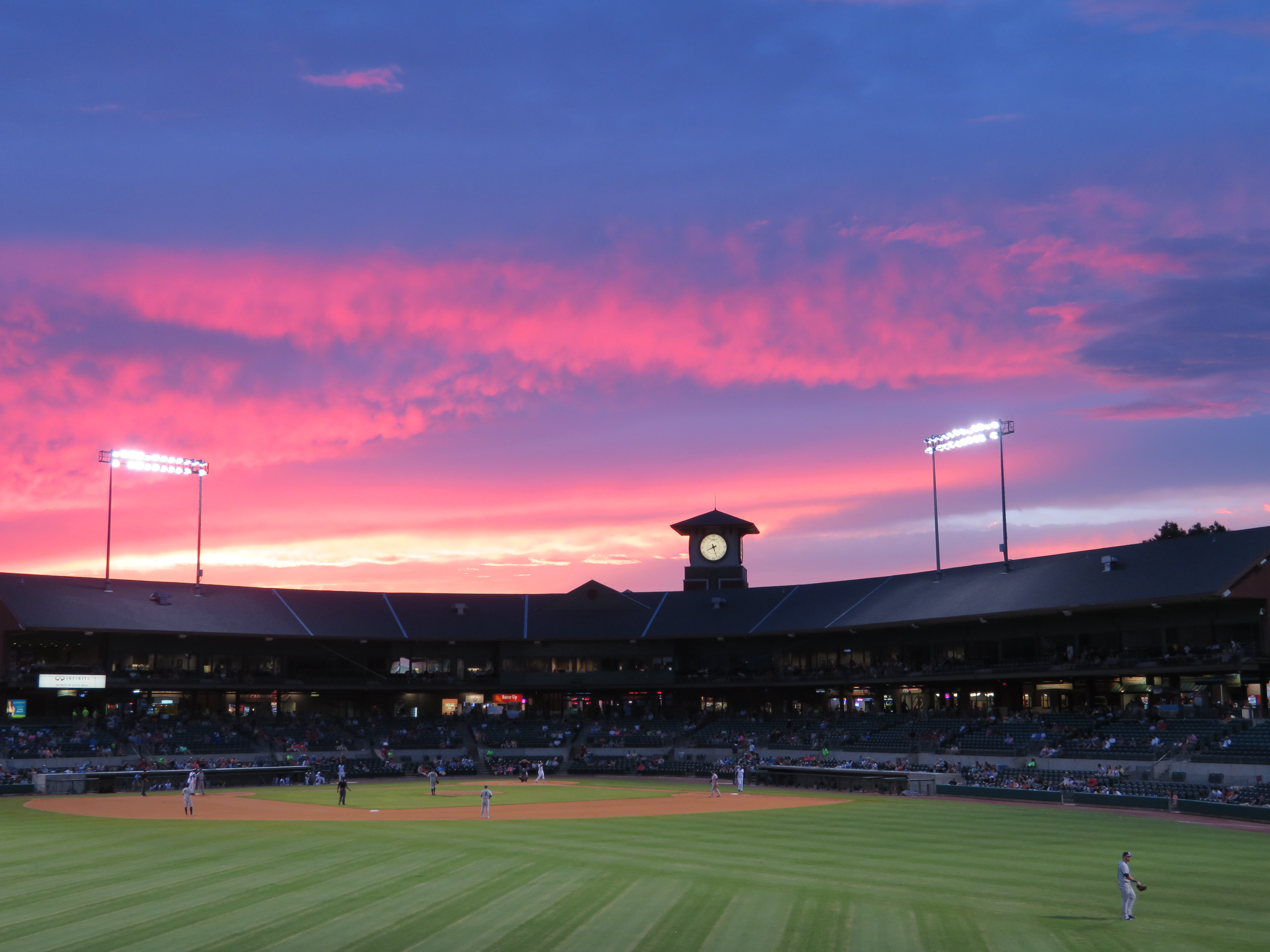